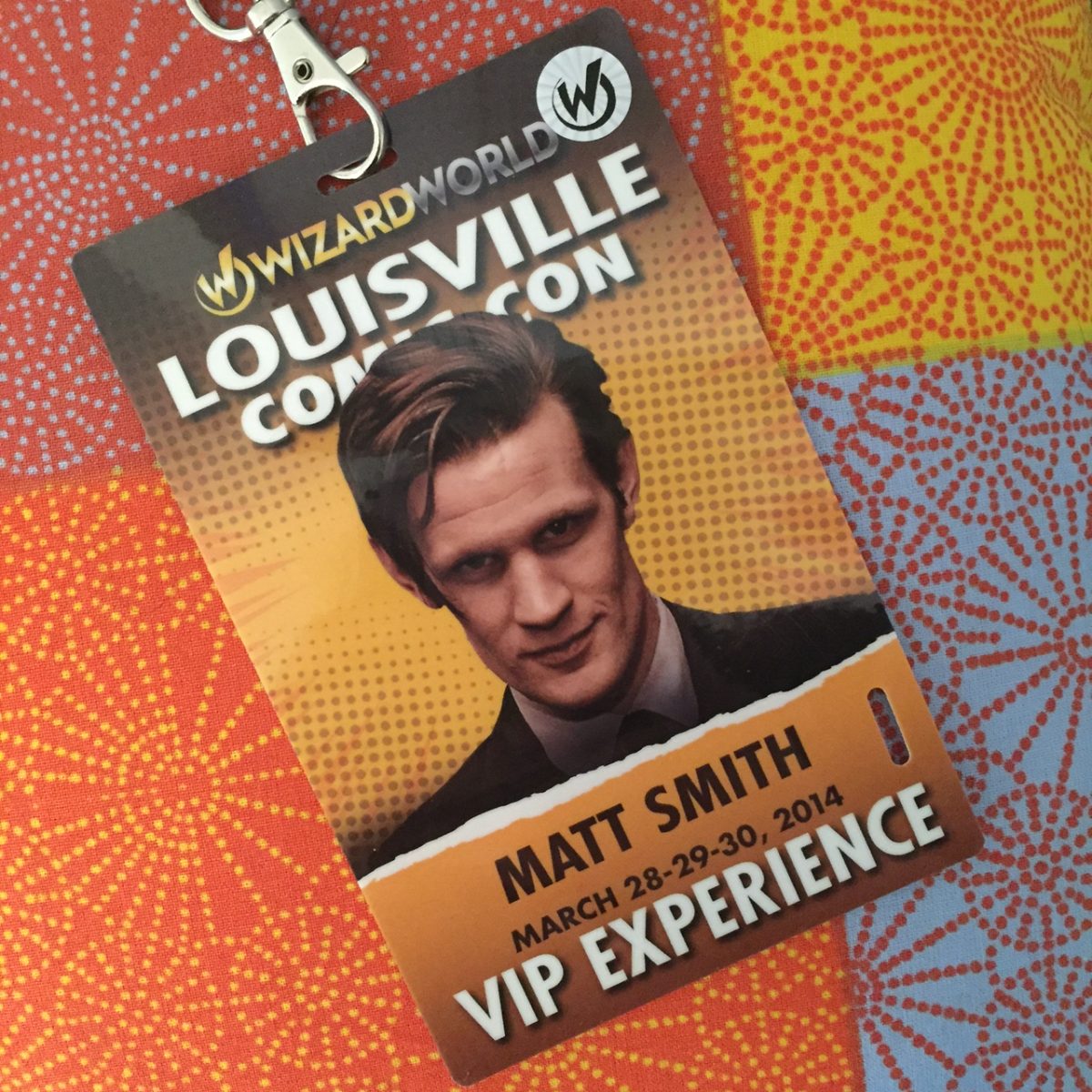 That was it. No explanation, deliberately vague.

Was I supposed to be impressed? Concerned?

Oh God, was this one of those weird cheating confessions that you hear about when guys go away on business trips? You never know.

My husband was at a boring legal conference in New Orleans. Before he had left a few days earlier, he had tried to convince me to leave behind the bum-numbing February freeze in Toronto, and tag along.

Sure, it would. Entertaining myself—someone who doesn’t enjoy spas, or love shopping—in a city I didn’t know, for hours on end until his days finally wrapped …

So I let him go solo, and he met some mysterious doctor-type person. Hmm.

I wasn’t about to play games

Enough. He was wasting my time.

“Why are you all giddy?” I asked once I could reach him on the phone. Despite any worse case scenarios, I laughed. “Was it Doctor Oz?”

“Doctor Oz? Why would you think I met him?” He sounded amused and cagey.

“He’s the only famous doctor I can think of.”

My phone slipped from my hand, and landed on the hardwood with a clatter. My husband had met Matt Smith, star of the BBC’s worldwide sci-fi smash, Doctor Who. I love Matt Smith. I had missed out, big time.

I have always been a fan. I cannot remember a time when I wasn’t swooning over someone or something: Snoopy, Duran Duran, Blur. I’ve belonged to fan clubs. I actually ran one for a spell—the official booster club of the Toronto Maple Leafs hockey club. I answered fanmail for NHL players. I even babysat 90210 actor Jason Priestley’s dog in the late ‘90s at my MuchMusic (Canada’s MTV-type music video channel) job.

In fact, my time in broadcasting at Citytv and MuchMusic was like fan heaven. Every day, rock stars or actors would flounce in for performances and interviews. If you were professional—and kept your hands to yourself—you could watch, maybe say hi, and if you were really lucky, get a photo with them. I learned how to be respectful and empathetic of famous folk, and my manners and self-awareness paid off. By the time I handed in my security pass on my last day, I had met most of my idols.

In the years that followed, new favorites continued to whip through the revolving door of my pop culture life. Some exited quickly, others stuck around, and sometimes when luck was on my side, I met a few.

But Matt Smith wasn’t amongst them. Turns out, my husband was just in the right place at the right time. He had spotted a kid in his hotel carrying a photo with my favorite Doctor, and before he could say ‘cancel all my calls’, he dashed off across town in a taxi to another convention—a comic convention.

We are big pop culture aficionados. Films, TV shows, music, bring it! We actually met and fell in love over an Irish indie band (Yay, The Divine Comedy!). Instead of grown up objets d’art, and scented candles on display, our home boasts Doctor Who figures, Snoopy artwork and Lord of the Rings statues. My workspace is watched over by Paddington Bear, my Sherlock “The Game is On” mug, and an original Ghostbusters Stay Puft Marshmallow Man. Pop culture is our ‘thing’, and we’ve never shied away from it, but amidst all the concert ticket stubs, and t-shirts something was missing—comic con lanyards.

These celebrations of all things geeky simply weren’t on our radar, and why should they be? Back in 2014, I thought that comic cons were for spotty, superhero-obsessed males who lived in their parents’ basement. Didn’t you need to possess Wikipedia-worthy knowledge of Marvel Comics to set foot inside? Wasn’t the ability to speak Vulcan a prerequisite? From afar, comic cons had always seemed like a nerdy sausage party—cringe worthy and kind of cliquey, ruled by the mantra ‘No Girls Allowed.’

But a comic con magically brought Matt Smith to my husband, and I wanted in on that action. Within minutes, we booked tickets to a con the following month in Louisville, Kentucky. I would happily put up with aggressive male elbows, deodorant dodgers, and know-it-all comic book completists to meet my Doctor, even if it killed me. 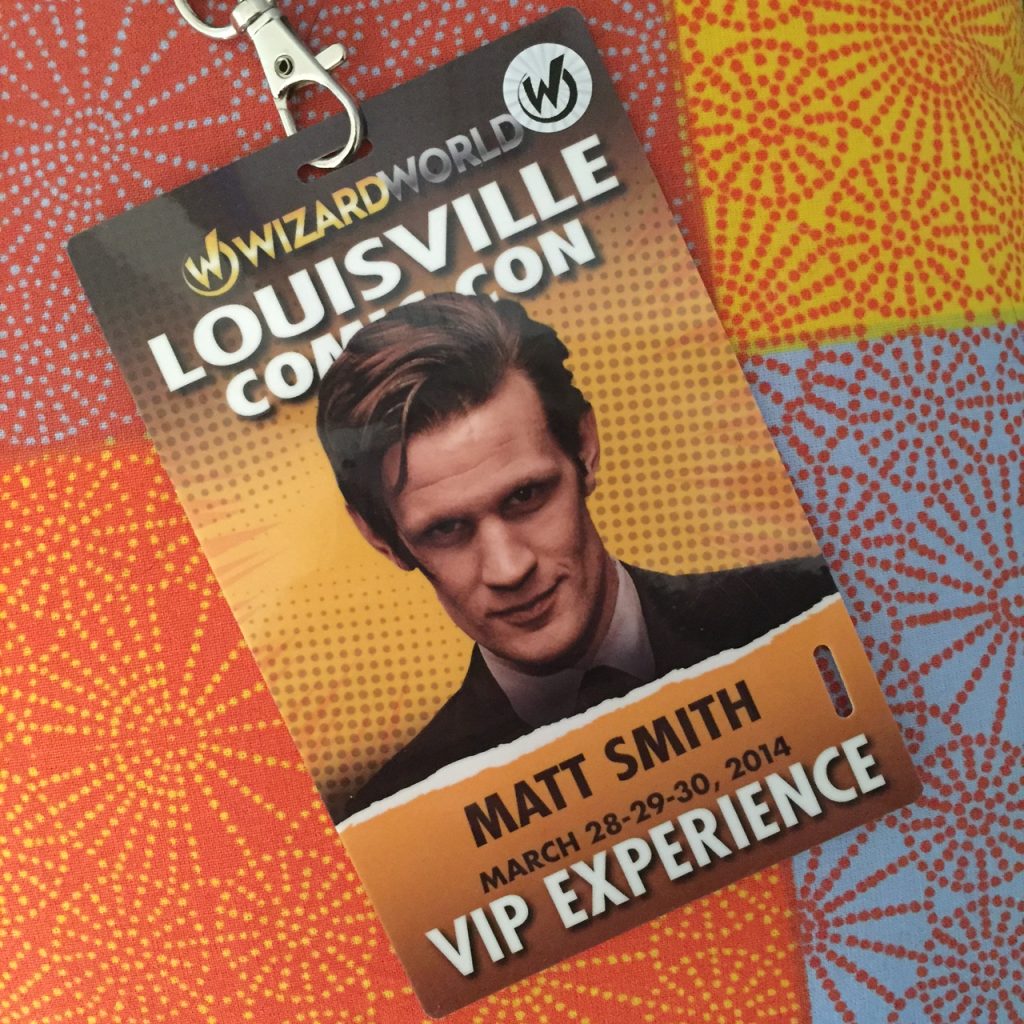 The Doctor will see you now

A few weeks later, March rolled around, and in a stuffy airplane hanger of a convention hall, I got my wish. I met Matt Smith along with several hundred other fans. He was funny, engaging, and utterly charming. We talked about British soccer. I was in Whovian heaven.

But the weekend turned out to be about more than just Matt. While walking the aisles in Louisville, I felt a shift inside. I gave in to my inner geek goddess. A whole new world opened up to me.

Those preconceived ideas of mine? Some were proven right, but others were shattered. Yes, there were plenty of socially awkward guys who had never kissed a girl, clutching their rare collectibles to their chests, but they weren’t the only ones queuing up for autographs and photo sessions.

We met teachers, PR execs, students, entire families, and so many brilliant women—females, who like me, weren’t sure at first that a comic con was for them. Some admitted to me they were embarrassed to share their love for Supernatural, Star Wars, or Doctor Who out in the ‘real’ world, but here? They could finally let their hair down, to be their true selves, to not be told that they’re weird for loving something a little bit too much.

I was impressed at how passionate they were about their fandoms and cosplaying, and boy, were they welcoming. I didn’t have to love comics to belong. I didn’t have to be dressed up like Harley Quinn to be accepted. And I certainly didn’t have to be a guy. I had finally found ‘my people’. I could fly my fangirl flag freely—in public, in any way I saw fit—without fear of embarrassment, judgment, or exclusion based on my interests or my sex. I may have been late to this very public party, but I was all in.

As women, when we enter our twenties, we’re told by society that we have to ‘grow up’. Childhood favorites such as stuffed animals, Disney comics, toy cars, and action figures get chucked and are often replaced by respectable (stereotypical?) hobbies (gardening, home decor, shopping, cooking?) that keep women where many would like them to be kept. Cartoon t-shirts make way for business attire, and conversations tilt towards boyfriends, job promotions, and biological clocks.

Yes, we are told these things about ‘proper’ adult behaviour, but not all of us obey. I hate gardening and cooking. Shopping? Not a big fan, unless it’s for books, DVDs, or collectibles. I still own many of my stuffed toys and action figures (hello, R2D2 and C3PO) from childhood, and they’re out and about in my home. Women like me, we’re outliers, doing things a little bit differently. But despite my quest to be true to myself, I didn’t always shout it from the rooftops. Even ten years ago out in the work world, such hobbies and behaviours were seen by many as immature.

But, for a few hours in a convention hall, all the mature, ‘adulting’, the pretence of how a woman over twenty should behave fades into the distance, to be dealt with another day. In this playground, you can outwardly relive and revel in your passions for aliens, Harry Potter, or whatever rings your bell. You can unleash that inner kid who loved Wonder Woman, Jem, and Buffy without apology. No one judges. Everyone belongs. 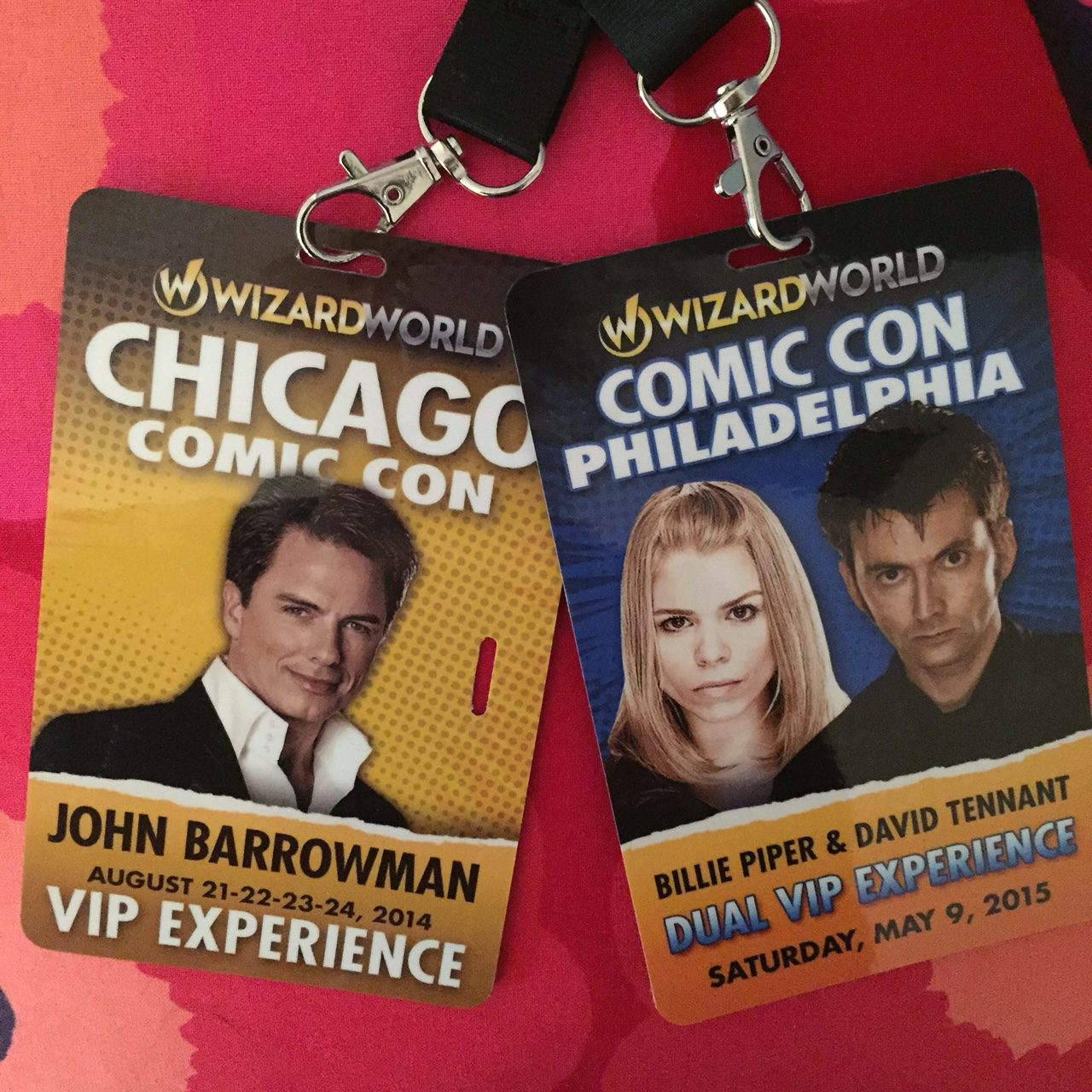 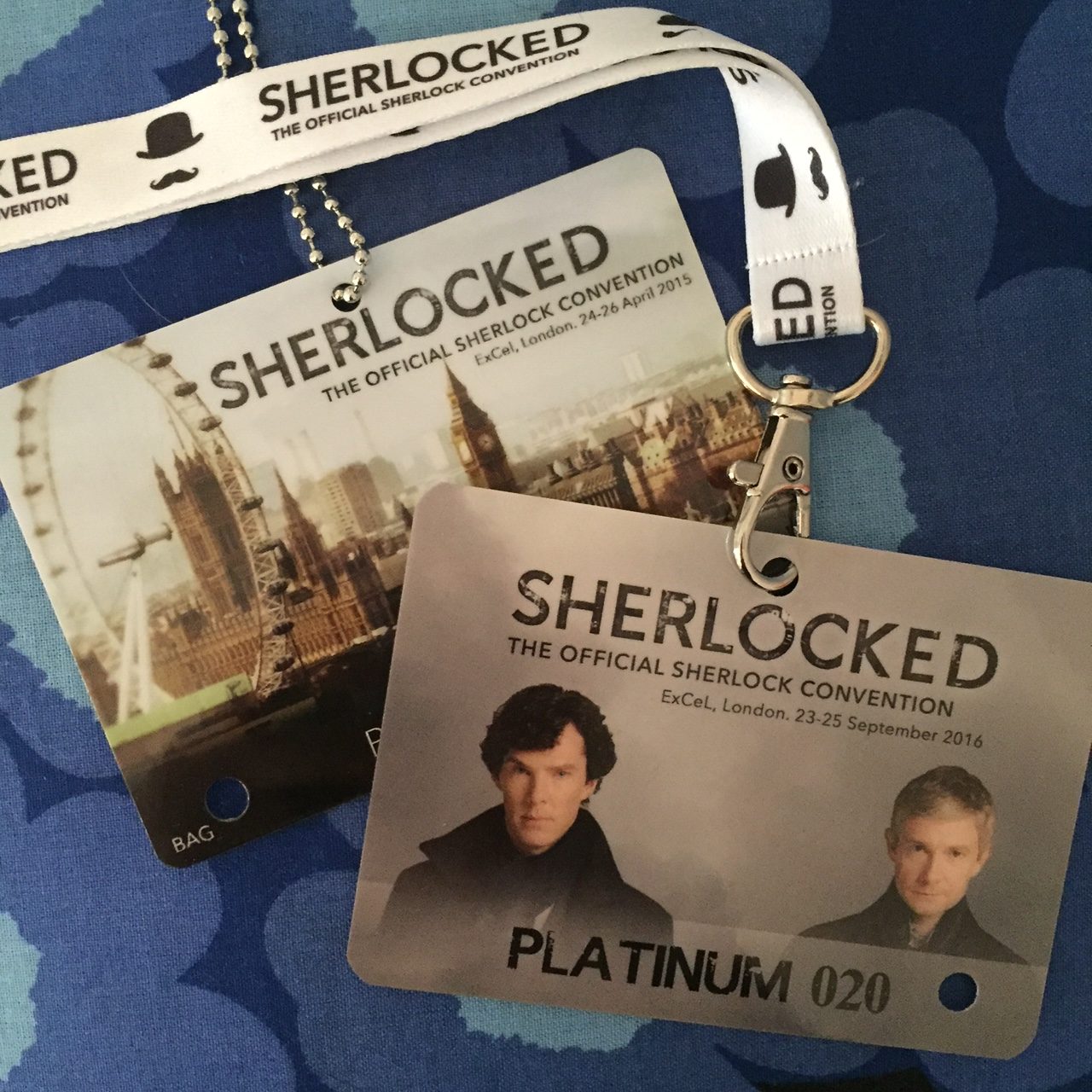 For two days in March 2014 wandering around that noisy, cavernous convention hall with my husband, my own personal beliefs were confirmed—the cliché of what it means to be a ‘grown up woman’ is a total con. You can be mature, successful professionally, a parent, and still love geeky things publicly without apology. It doesn’t make you silly, stupid or unworthy of the corner office. It makes you fun, joyful, and someone interesting to know. And if people don’t like it or agree, that’s their problem, not yours.

So, my advice … don’t be afraid of cons. Don’t be afraid to celebrate what you love. Be bold. Jump in. Wave that fangirl flag, and save me a place in the comic con line.

P.S. Since March 2014, I’ve been to cons in the States, the UK, and Canada (big wave to FanExpo in my hometown of Toronto). Once you start, you can’t stop!