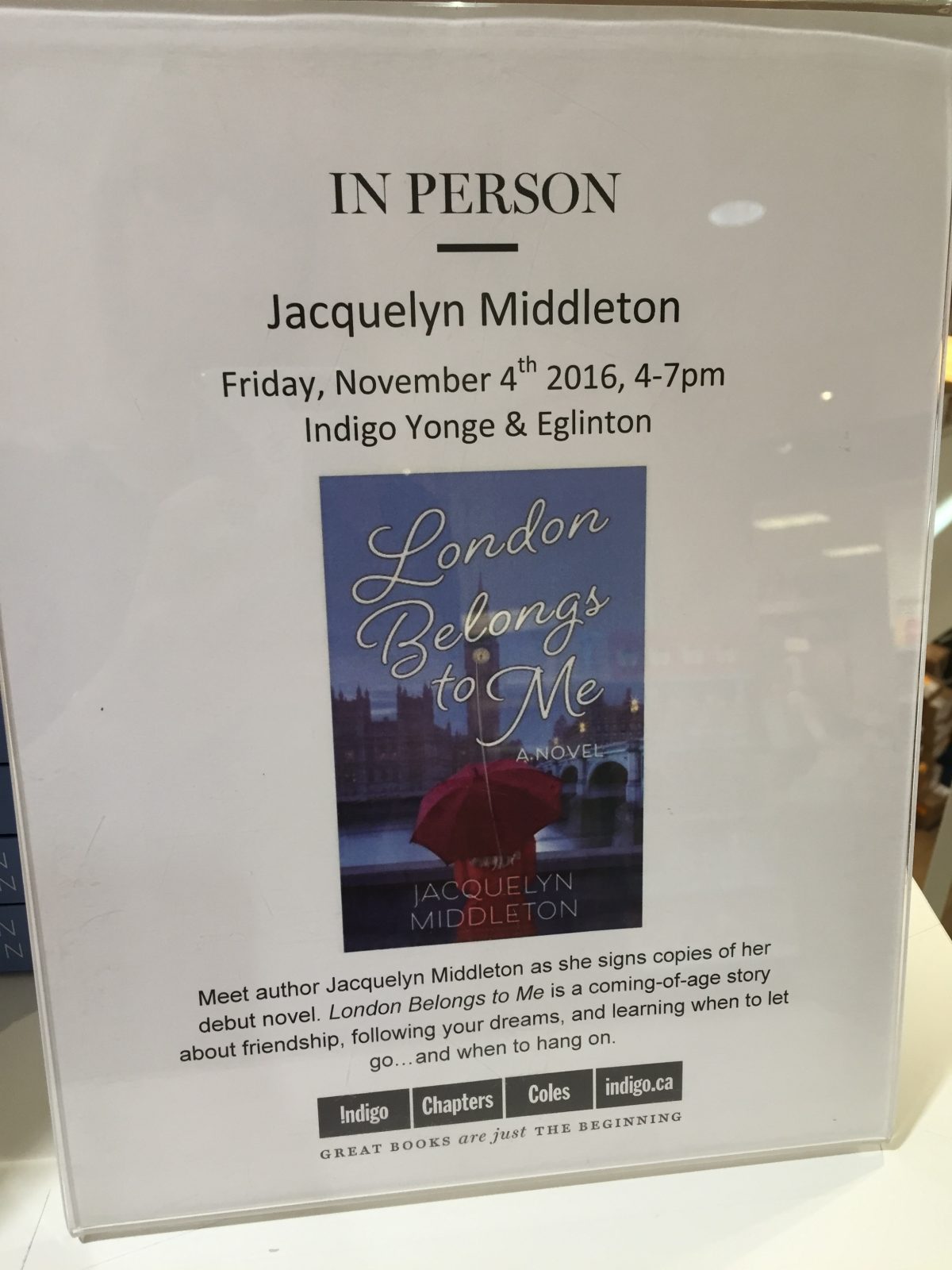 One of my favourite destinations in Toronto for novels, cards, magazines, and presents is Indigo, Canada’s largest bookseller. I’ve been to various branches for signings and have seen the promotional material adorning their stores for author meet and greets. I would spot these signs and think, “one day, one day.”  Well, my “one day” happened—this past Friday at their Yonge and Eglinton location in midtown Toronto.

The wonderful Indigo staff gave me a prime spot on the second floor with a table full of paperback copies of London Belongs to Me.

I was ready. The books were waiting for their new owners, but (and the question had to be asked), would anyone show up? Sitting there on your own, surfing Facebook on your phone …  it’s a debut author’s greatest fear (next to no one purchasing your baby). What if no one comes?

October is one of the busiest months for book releases with many publishers getting their clients’ work on store shelves for the sprint towards the holiday shopping season. It’s a challenge for established authors to get their books noticed, so imagine how tough it is for someone like myself, a debut with a small indie publisher? With so many choices out there, and many of the big guns (Stephen King! Jo Jo Moyes! Zadie Smith!) releasing books this autumn, it’s incredibly difficult for new writers to emerge, find readers, and build a following.

But hopefully, London Belongs to Me is starting to make a few ripples. I’ve been fortunate to have some fire power in my arsenal. BookSparks, a premier team of PR experts (Hi Crystal and Korina!) have been working their magic getting press coverage for London Belongs to Me with Redbook, Elle, Cosmo, the Huffington Post, PopSugar, Buzzfeed and many other outlets. Kirkus Reviews, and RT Book Reviews both praised LBTM. Readers have been buying it, and posting photos online of the cover. It’s all good!

So there I was on Friday, feeling a mix of giddy excitement, and nerves, just like all debut authors before me. Sometimes it’s easy to f

orget that the authors that I love—Karen Swan, Mhairi McFarlane, Taylor Jenkins Reid—all began in a similar spot with, I’m guessing, the same feelings, hopes and fears.

Like most Fridays, Indigo had a steady stream of browsers and shoppers on the second floor. It’s where most of the novels are on display, so I was in the ideal spot. I kept my fingers crossed, hoping that book lovers would take a chance on my debut. For the first ten minutes, it was pretty quiet. Off into Facebook, I went! I tweeted, “I’m here!” and contemplated my next Instagram photo.

But my online sojourn didn’t last too long. Phew!

I was so happy to see this guy! That’s John, my first boss in TV broadcasting. He hired me at Citytv when I was twenty and still in university.

John was the first to arrive. We haven’t seen each other for at least twelve years! I was thrilled that he came to catch-up, and get his own copy of LBTM. Carla arrived, too, just in time for the fire alarm to ring loud and clear. The Yonge-Eg Centre has building-wide fire alarm testing several times per month, and lucky for us, it was that day, at that very moment. Everyone had to evacuate—even the film fans watching Doctor Strange in the Cineplex had to drop everything and head outdoors—for about twenty minutes. Carla and I took the opportunity to hang out a bit longer, and enjoy the unseasonably warm Toronto temps. Once back inside, Al, another friend from our days at Citytv and MuchMusic, joined us. He bought several copies as gifts. Thanks so much, Al! 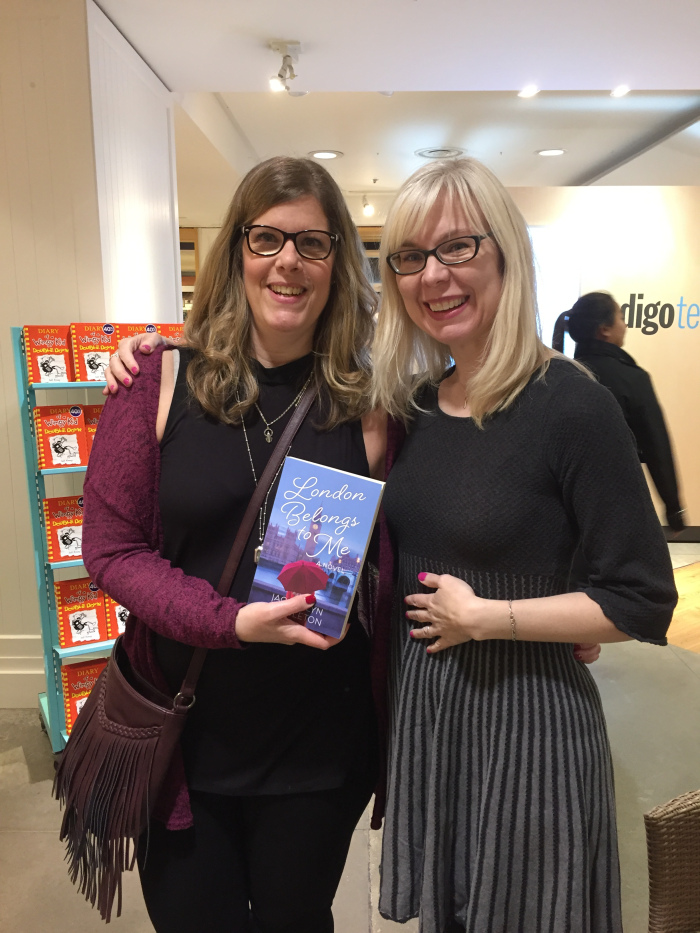 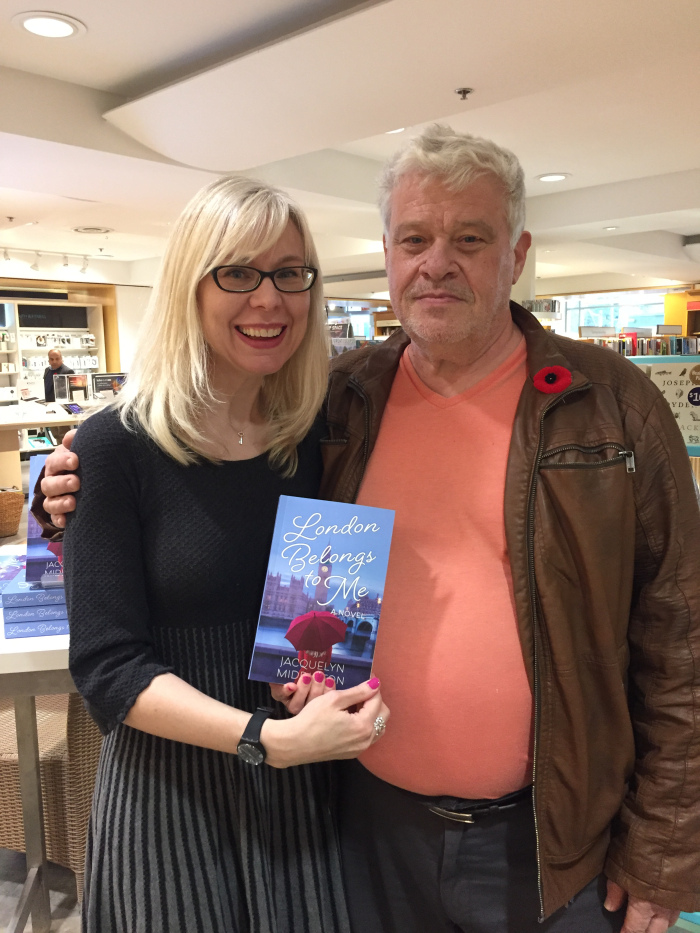 The three hours whizzed by with my lovely friends there to celebrate with me. Many bought more than one copy, too. Say ‘hi’ to Gabby, and Christine, as well as Dave and Joanna, and Len and Blake, and Tesla. 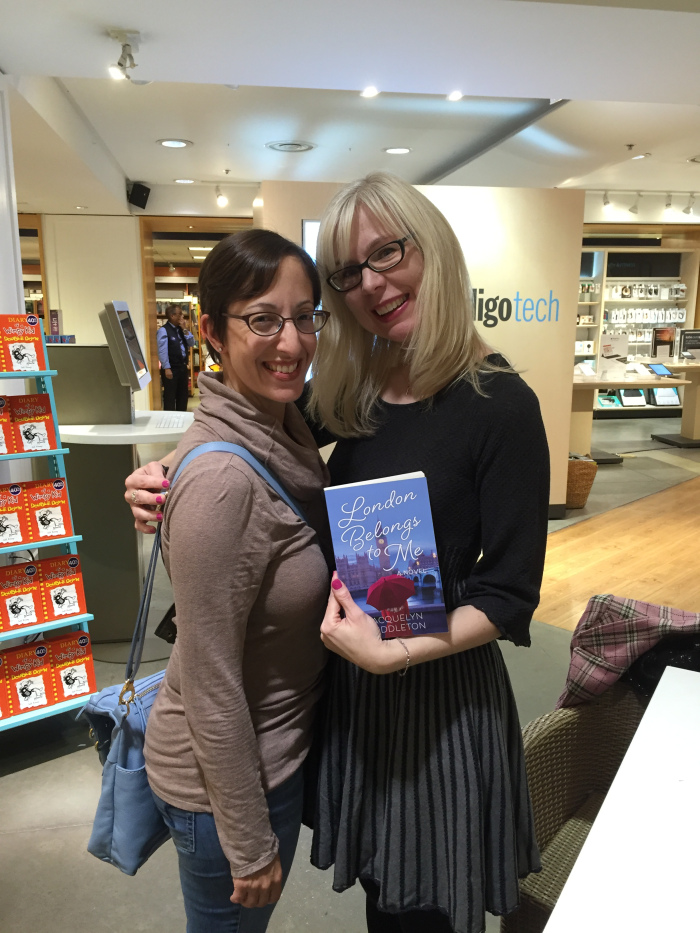 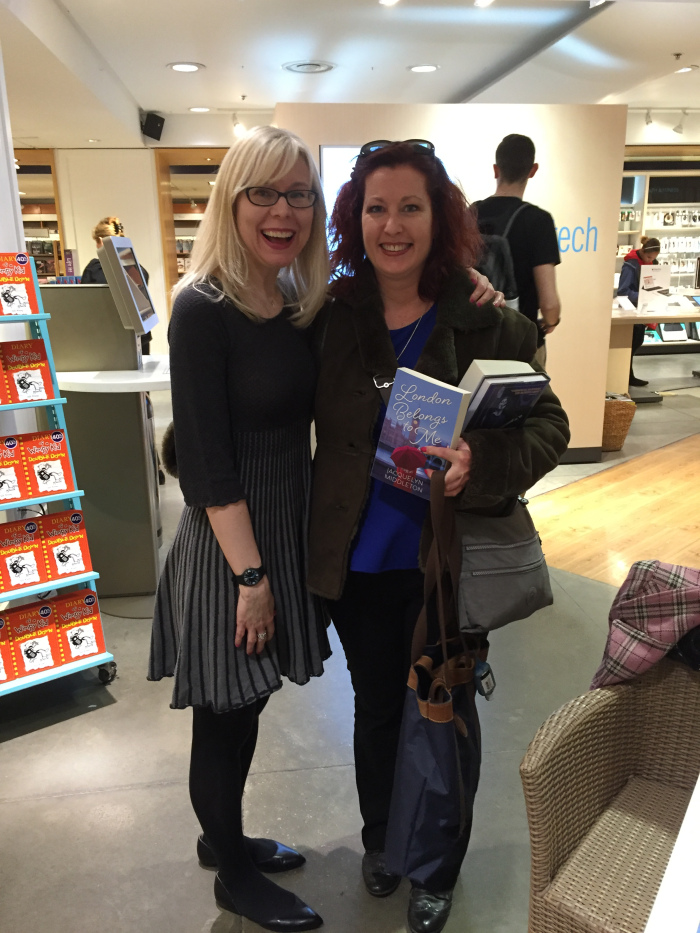 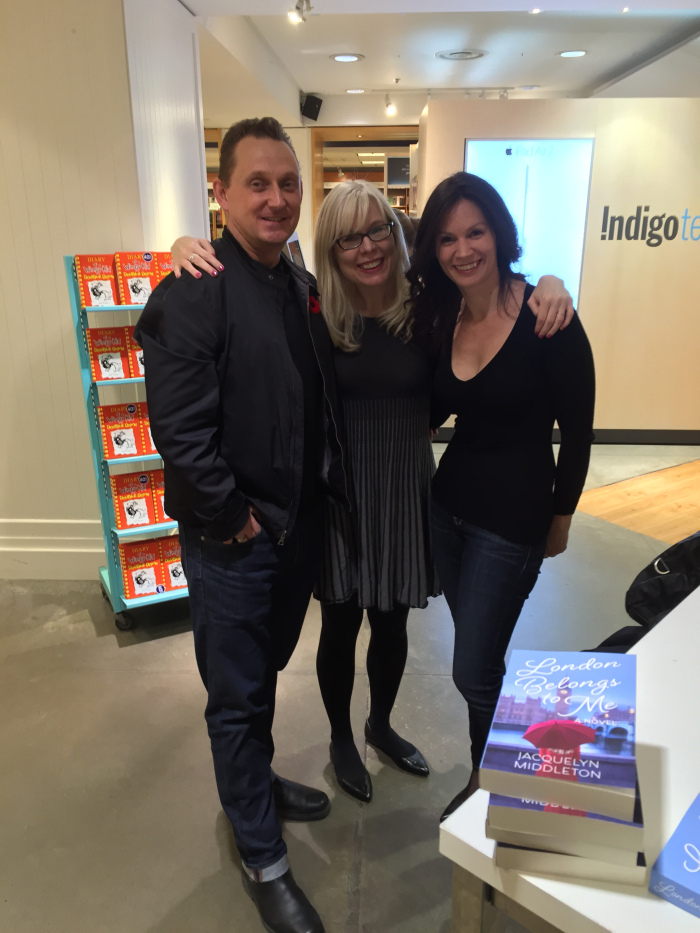 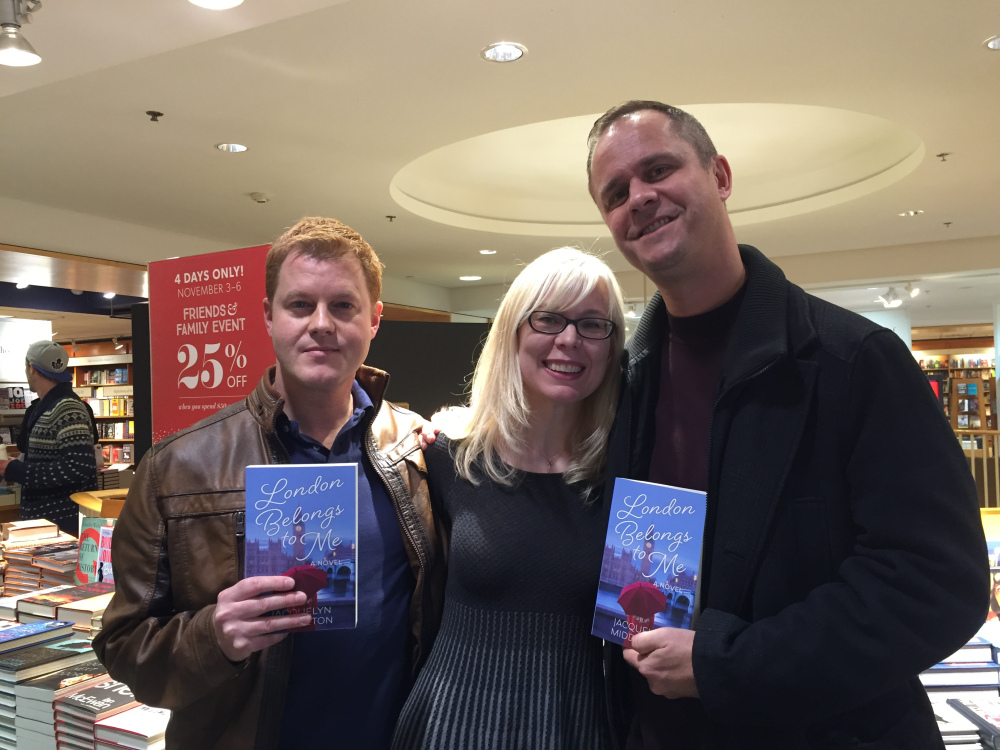 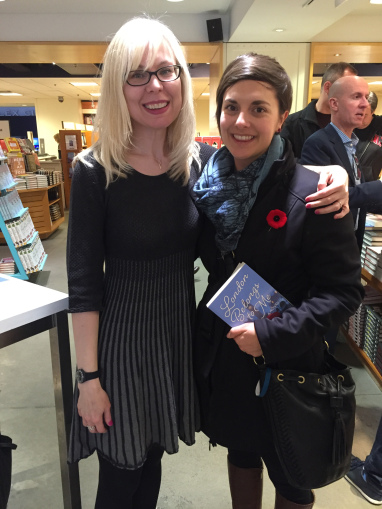 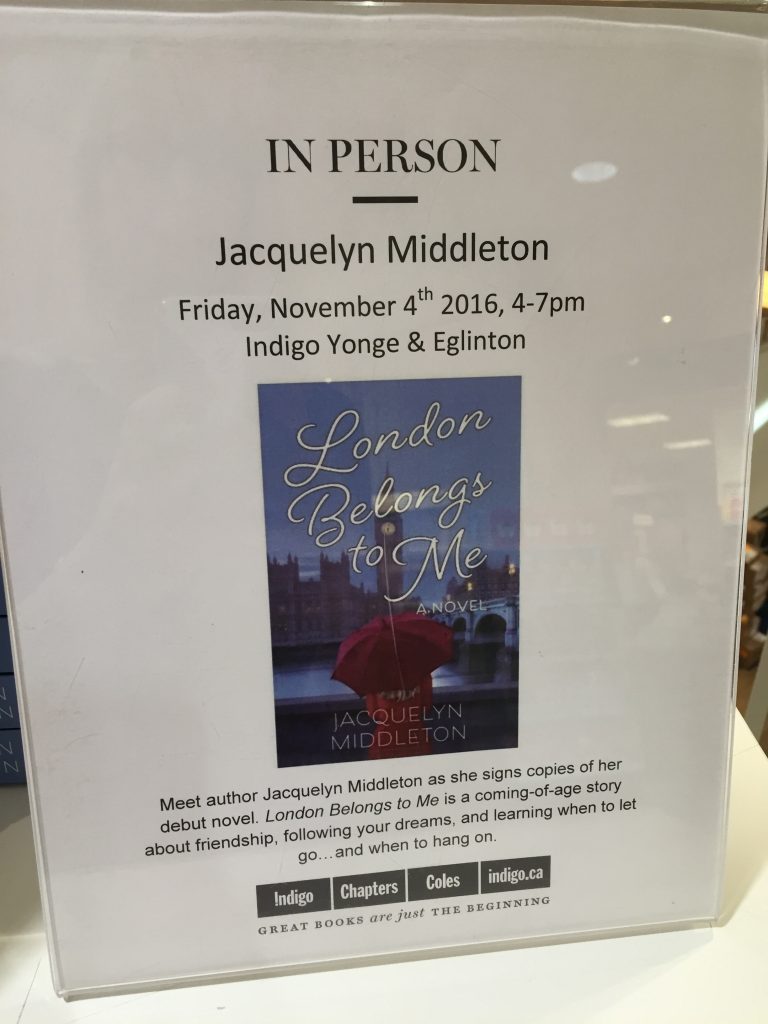 I’ve seen so many promotional signs for other authors, it was cool to see one for me.

By seven p.m, I had five books left. I saw many dear friends, and met a few new ones, too. I’m so thankful for my friends and family for all their support, for showing up at events such as this one, and buying my book. It means so much to me.

It’s also incredible to see your book out in ‘the wild’, and watch people react to it. 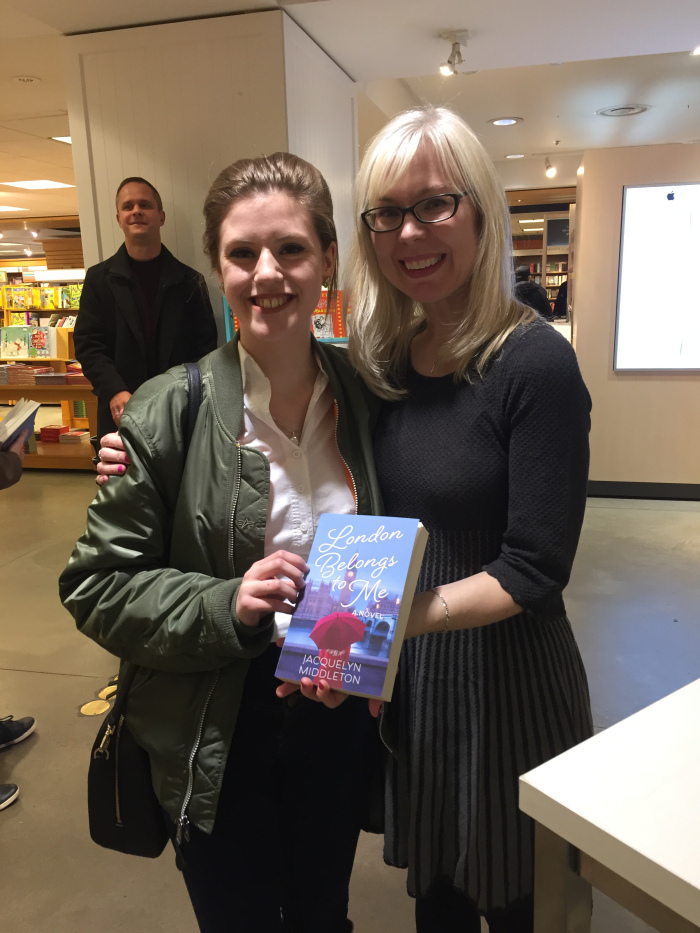 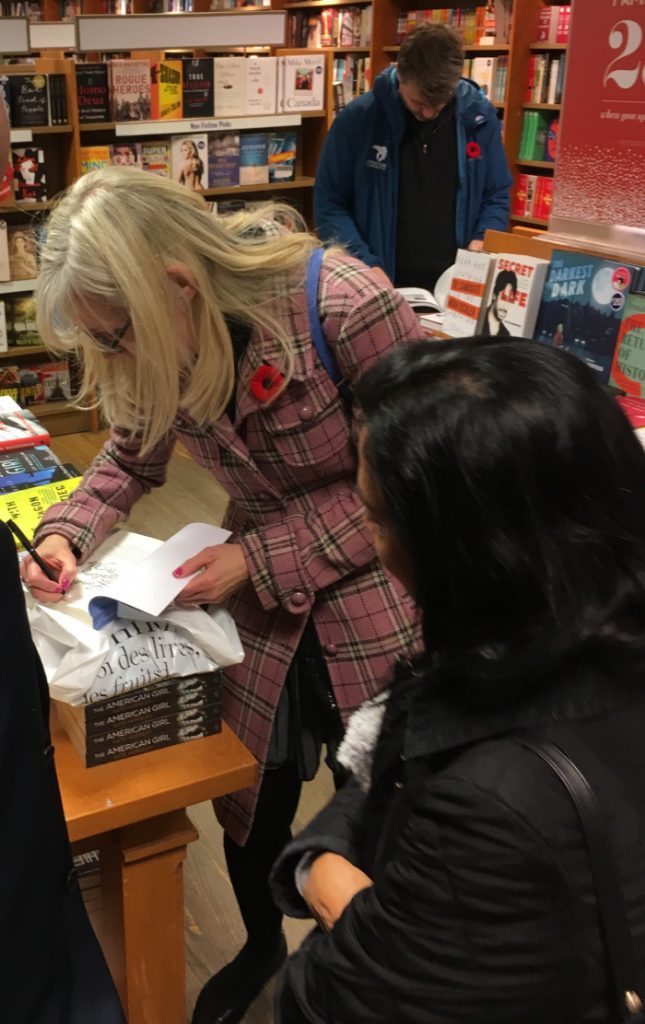 Something on the cover catches their eye. They wander over, pick it up, and check out the synopsis on the back. They flick through the pages and … decide to buy it! A dream come true. Thank you to Allison, Indra, and everyone who took time out to say hi to one very appreciative author! I really hope you enjoy London Belongs to Me. Please let me know what you think! Contact me via Facebook, Twitter, Instagram or this website.

This event wouldn’t have been possible without Indigo. I’d also like to thank Nicola and everyone at their Yonge and Eglinton location for making this debut author feel welcome. xo

(Thanks to Gabby and Len for the additional photos!)

on 09 November 2020,
ROYAL WEDDING WEEKEND GIVEAWAY!
Please send me a FREE Kindle e-book of
'LONDON BELONGS TO ME'
Please authorize contest@kirkwallbooks.com on your Kindle device to receive the e-book file before entering!